Josh is a voice controlled home automation system. Like Siri or Google Now, the Josh programming language is built to support natural language voice commands. This includes greetings, questions, instructions, and more. Further, Josh is built to control and connect any “smart” device, from any device. For example, with Josh you can turn on your speakers from your watch, change the temperature from your phone, shut off the lights from your desktop, etc. Initially, Josh will be focused on the smart home, but over time we envision a more general-purpose AI. Josh will go where you go, making your life easier and more productive.
Why the smart home?
The “smart home”, or “connected home” as it is sometimes referred, is a truly exciting next step in the proliferation of the Internet of Things. As more and more applications are coming online, from your thermostat to your lights to your TV, the ability to connect and control these devices remotely opens up an assortment of opportunities. For one, energy savings becomes a thoughtless exercise with applications that shut themselves off as you leave the house. Second, the convenience of having instant and continuous awareness of your devices, which are operating, and the ability to turn them on or off from anywhere offers a sense of peace of mind and convenience. Third, the system is able to network together, connecting sensors like temperature and motion to devices like lights and locks. More-so, your home is your sanctuary, a place to feel comfortable and secure. Making your home “smart” transforms a bunch of wires and walls into a personal refuge. Until recently the prospect of a truly smart home was merely fiction, but in the last few years the number of “smart devices” has grown steadily and adoption is becoming widely accepted. It is now time for a truly smart home. 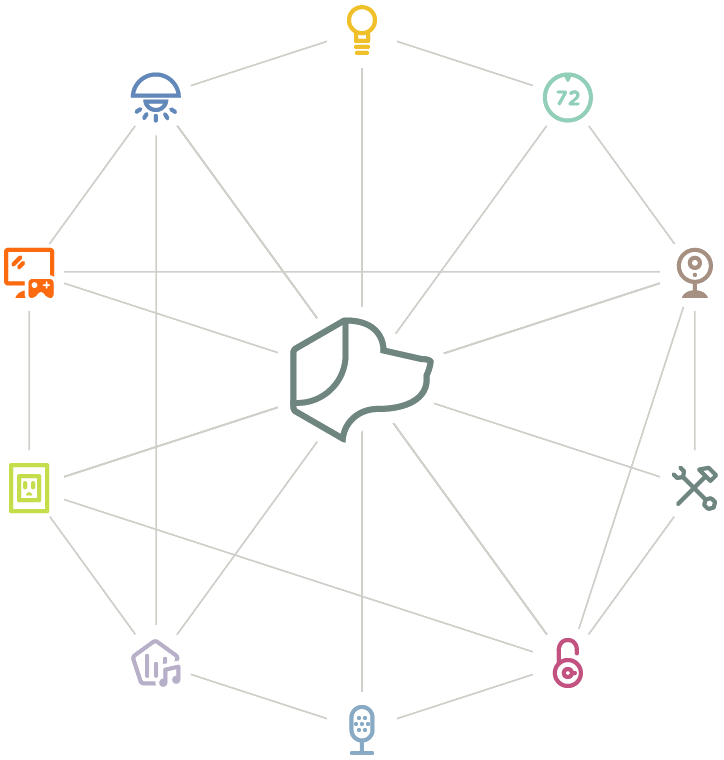 Why voice?
One of the challenges to building a fully automated house, particularly one that grows and evolves over time, is the ability to program with ease. In theory it’s great if your sprinklers turn off when it rains, or if the lights go on at sunset, but these actions today take a skilled programmer many hours to assemble. Compare that to asking a friend to turn off the lights or put on the Coldplay station. Now imagine if that friend had a perfect memory, was reliable, didn’t mind multitasking, and only needed to be asked once. In essence, that’s the promise of voice. Using natural language commands as though talking to a friend, Josh can be taught with ease. Even complicated queries can be effortlessly programmed, such as, “At sunrise if I’m home slowly fade the bedroom lights on, open the drapes, turn on the radio, and brew a pot of coffee.” We believe programming should be as natural as chatting with a friend, and this capability is essential to a truly connected house.
Why now?
There’s a convergence of opportunities making this the right time for this type of product. For one, Internet of Things (IOT) is becoming widely recognized and adopted, expected to surpass a trillion dollar industry this decade. With the Apple Store stocking products like Nest Thermostats and August Smart Locks, these products are now becoming known and accepted by the consumer market. Voice recognition technology is getting more attention than ever before, with Siri built into every iPhone and Google Now powering Android devices. The proliferation of always-on mobile phones has created a culture both comfortable with and anxious for more automation. All this said, the average home is still not connected, the big players in the space are 10+ years old and lacking innovation, and most systems are built around a proprietary system making it difficult to connect products from various vendors. In other words, the technology is ripe, customers are anxious, and the incumbents aren’t meeting these demands. Sort of like the early days of personal computing, the pieces are all in place and the market is ready for someone to integrate the concepts into a beautiful product.
Why us?
Tim Gill and Alex Capecelatro make for an interesting yet optimal team to tackle this problem. With a 34 year age gap, they represent the boomers and the millennials. Gill founded Quark in 1981 and pioneered a series of software solutions through the 90’s. Quark expanded to over 160 countries generating revenue in excess of $300MM per year as a private company. Tim is a self-professed math geek and software savant. Capecelatro, on the other hand, comes from a series of design-focused consumer products, including Fisker’s enviable electric car, the Karma, and the iOS app Yeti with members in more than 120 countries. Capecelatro has a background in research science and a passion for bringing cutting-edge technology to the masses. Together Gill and Capecelatro represent the spread of the homeowner market, have a unique ability to design, build, and release exceptional products, and a track record of doing so.
Let’s work together
Josh is a platform. We realize it would be virtually impossible to build for every use case, integrate every device, and program every rule on our own. Much like the Apple or Android ecosystem, Josh is designed to be developer friendly, making its capabilities widely accessible to other developers. Unlike many APIs, Josh will be easy to work with, won’t require the developer request access, will be well-documented, and community supported. Our aim is to build the foundation and set the example for which other developers can exploit and surpass for their own unique applications.
Our goals
To make it easy and fun to connect to any device, from any device. In the beginning the focus is on the connected home, but over time this expands to transportation, education, productivity, and more. Josh is a conversational agent aware of your surroundings with an effort to make predictive suggestions. We envision Josh as a voice-based OS that seamlessly connects to your smartphone, smartwatch, and other connected gadgets in order to be always ready and always aware. The result will be decreased cognitive load, providing for more time to be with the people you care about and spend time doing the things you love. Our goal is to make Josh the personal assistant you never knew you needed.